Without your computer keyboard, whether it’s part of a desktop or a laptop, it might’ve been fairly difficult to get to this article. Sure, maybe you’ve bookmarked the Web site and you used your mouse to click around between several links, but most of the time, you probably type the Web site address into your browser to get here. Most of us with personal computers use a keyboard almost every day to compose e-mails, type out word processing documents, visit Web sites and perform searches. And as easy as it may seem, typing is a skill we have to learn and practice in order to perform properly. Most students take typing classes as early as elementary school, and word processing is one of the most common skills listed on a job-seeker’s resume.

Without keyboards, communicating between family, friends and businesses would be a much less streamlined affair. Today, even smartphones come equipped with smaller keyboards. Phones that are more focused on e-mail and text messaging, like the BlackBerry or several of the slider phones, offer these as a more straightforward way of typing out text. On a typical cell phone with a three-by-four numeric keypad, for instance, where at least three letters are assigned to a number, you often have to punch through each key several times to get one word on the screen. Some people are remarkably adept at this — just watch some people on a train or at the airport rifle through several text messages in a matter of no time — but for some, the act is cumbersome and takes far too long. Miniature keyboards, however, attempt to solve that problem by giving users a complete QWERTY setup to type e-mails, text messages and reminders.

— A laser or beamer projects visible virtual keyboard onto level surface. A sensor or camera in the projector picks up finger movements Software converts the coordinates to identify actions or characters. Some devices project a second (invisible infrared) beam above the virtual keyboard.

But there’s another problem. People with bigger fingers may find the keyboards on smartphones and PDAs too small. To make up for this, some manufactures have developed special virtual laser keyboards to accompany handheld devices. Instead of having to poke lightly around your phone’s keyboard, a virtual laser keyboard connects to the phone and projects a full-sized virtual keyboard onto any flat surface. 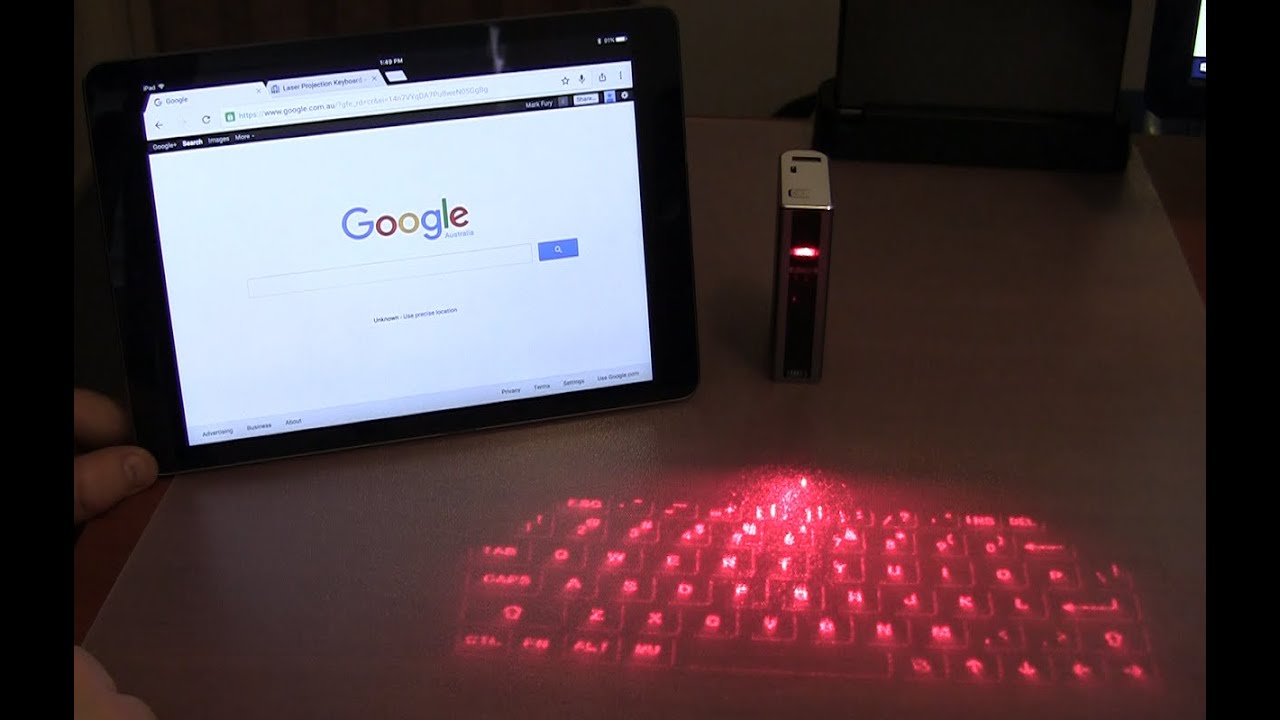 So how do they work?

At their most basic, all keyboards, whether they’re physical or virtual, are input devices — once you type in a certain series of keystrokes, you’re telling the keyboard to deliver a command to your computer. This allows you to write in a word-processing document, close out a program or write out a Web site’s URL in a browser. But apart from the science-fiction element, what sets a virtual laser keyboard apart from a regular keyboard?

A traditional keyboard, one that hooks up to a desktop computer or is part of a laptop, is very much like another smaller computer. If you take it apart, it has a processor and circuitry similar to the insides of your computer. Underneath each key is a grid of circuits, and once you press a key, the switch closes. This sends a small electrical current through the grid, which the processor recognizes and analyzes. The processor, in turn, sends the information regarding your keystrokes to your computer, and it can do this several ways. Most desktop users connect their keyboard using cables, although common wireless technologies like Bluetooth let you type from a distance, as long as the computer has the necessary receiver. Laptop keyboards, on the other hand, connect directly to the computer’s hardware.

When you type on a virtual laser keyboard, there aren’t any switches involved. In fact, there aren’t any mechanical moving parts at all. The device projects the image of a QWERTY keyboard onto a flat, non-reflective surface using a red diode laser. The laser, similar to the kind you see on those cheap laser pointers people wave at rock concerts, shines through a Diffractive Optical Element (DOE), which is simply a tiny image of the keyboard. The DOE, along with special optical lenses, expands the image to a usable size and projects it onto a surface.

But a simple image of a keyboard won’t get you anywhere — something needs to analyze the information you type in. Situated near the bottom of the device is an infrared (IR) laser diode, which shoots out a thin plane of infrared light. The plane, which is invisible and runs parallel to the surface, rests only millimeters above the image of the keyboard. When you start typing, you pass your fingers through certain areas of the infrared light. A CMOS (complimentary metal-oxide semiconductor) images your finger’s position within the area of the keyboard, and a special sensor chip called a Virtual Interface Processing Core analyzes the location of the intended keystroke. The device then sends this information to the computer receiving the commands.

So how do you use a virtual laser keyboard?

If it sounds like a gadget from the future, a virtual laser keyboard sort of looks like one, too, especially when it’s on full working display. They’re small and sleek, weigh about two ounces (56.7 grams) and comparable in size to a pack of gum, so they can fit easily into pockets or carrying bags.

But when it’s time to use the virtual laser keyboard, the full science-fiction novelty comes into play. Most devices either stand up straight on a rectangular base or prop up with the help of a stand that flips out from the back. Once powered up, the keyboard can connect to a smartphone, PDA or laptop via USB cable or, more commonly, Bluetooth wireless technology. These two connection options allow the virtual laser keyboard to send keystroke information to a word processing document, e-mail or any other program in question.

Although they’re small and convenient to carry around, you can’t simply pull out the virtual laser keyboard and start typing away in any location. If you were sitting on the bus, for instance, and wanted to write a quick e-mail on your BlackBerry, you couldn’t shine the device’s red laser onto your lap and expect it to work properly. Virtual laser keyboards require flat, opaque and non-reflective surfaces for working projection and typing. Once you have the keyboard set up on the right type of surface, the device displays a full-size QWERTY keyboard, which typically contains 60 or more keys. Then you simply type just like you would on a normal keyboard, although the sensation you normally get when typing on a laptop or desktop — the pops and clicks associated with the keystrokes punching up and down — won’t be there. In fact, it takes a little bit of practice for many users to become accustomed to pressing their fingers on a smooth surface.