Apple rarely apologizes when it messes up. But when it does, it’s usually followed by even more fervor and upset users.

Case in point: Apple finally admitted it did a poor job communicating to its customers about how and why it slowed down iPhones with older batteries.

And while most people will forgive the company and accept its two forthcoming solutions (a $29 battery replacement for applicable iPhones and a future software update that’ll better explain your device’s battery health), there’s an equal amount of people who are now slamming the company for not doing even more for its users, like designing iPhones with removable batteries.

Cute idea — but it’s a little short-sighted. It’s not that Apple can’t make an iPhone with a removable battery, but because it doesn’t make any sense to. Removable batteries had their time in the ’90s-00s.

There are other features that we prioritize over batteries that can be swapped out.

When you’re in the market for a new smartphone, what features do you typically look for? Perhaps you need to know what processor is installed or the quality of its camera. The battery’s quality is another key decision-maker when picking out a new phone. This time, however, we’re not going to discuss how long a battery lasts. We’re going to discuss the removable vs. non-removable battery issue.

It’s not something you usually see advertised alongside battery life, screen size, and camera megapixels. Sometimes they’re called “non-removable,” and sometimes they’re “built-in.” However, removable and non-removable batteries have their fair share of differences (one of which you can tell from the name alone!) and can influence whether or not you purchase a specific device.

The difference between the two is very simple. Removable batteries can be taken out of the phone, usually by opening up the back plate and taking it out. Non-removable batteries will be encased within the phone’s vital components. It’ll be hard, if not impossible, to remove the battery without first tampering with very important parts of the phone.

Despite its name, non-removable batteries are actually removable! The problem is it often requires so many special tools that it’s unfeasible to expect the average user to be able to remove one. For instance, it may involve tasks such as undoing the adhesive between the screen and the phone.

When the battery dies in a non-replaceable unit, the main solution is to bring it to a repair store. This is a nasty surprise for people who believe they can simply remove the battery and get a new one.

So why do companies make phones with non-removable batteries? Despite its restrictive nature, there are advantages to them.

For instance, let’s say you are choosing between the Motorola Moto G5, the G5 Plus, and the G5S Plus. By adding the restriction of a removable battery, all but the base G5 are immediately out of the running! 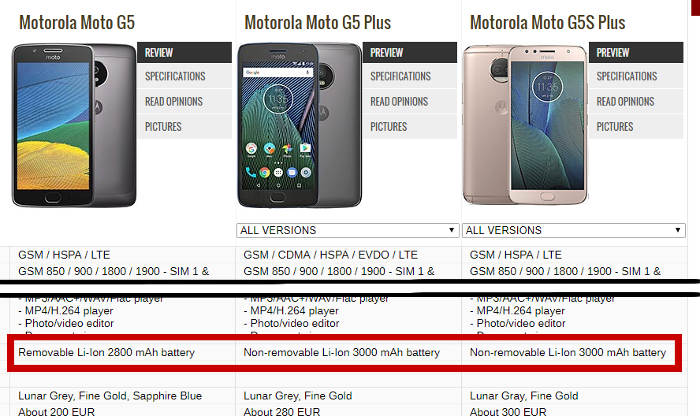 If you want to maximise the lifespan of your phone, a non-removable battery will be a thorn in your side. Pick out a phone that has a replaceable battery and read up on how easy it is to get a spare. That way you can keep your phone going for as long as possible.

While a battery being removable or non-removable isn’t a widely advertised feature, it can sometimes make or break a purchase. Now you know the in-depth differences of each one, and hopefully have an idea of which one suits you best.

Does a non-removable battery bother you? Or have you happily enjoyed phones without a single battery issue? Let us know below!