Stronger than steel, thinner than paper, graphene could be the future of tech. 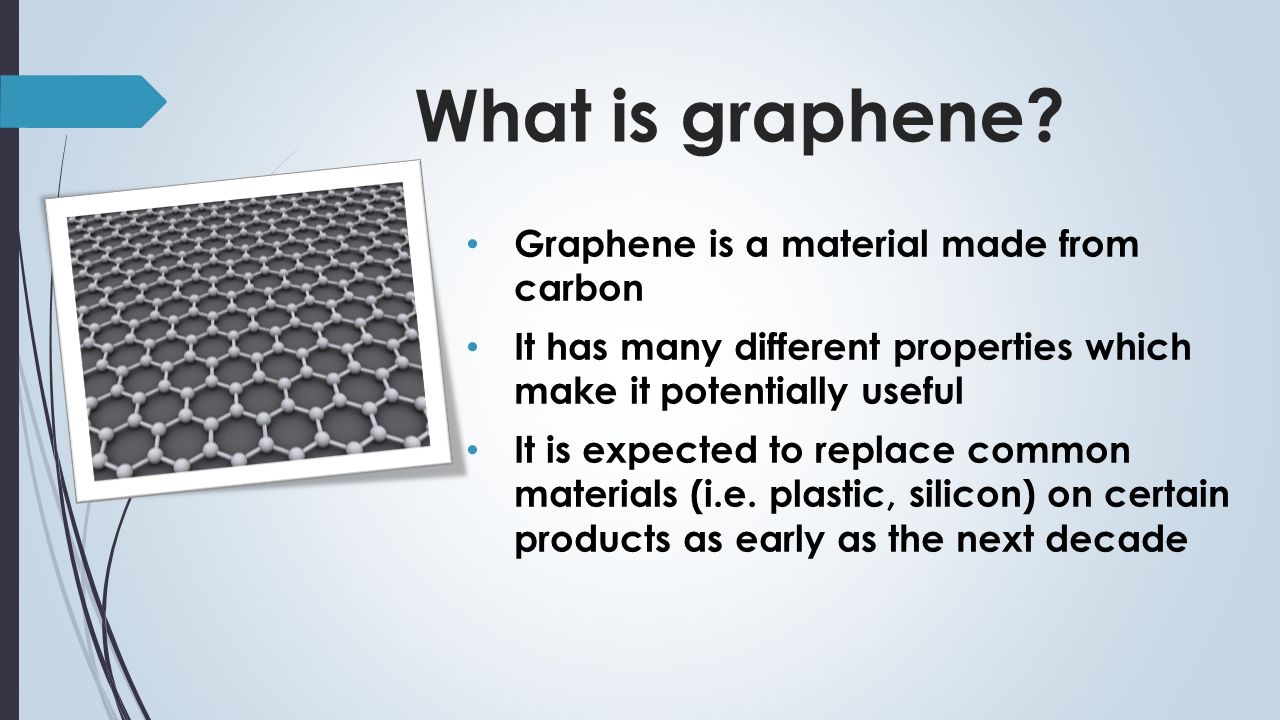 Graphene possesses other amazing characteristics: Its high electron mobility is 100x faster than silicon; it conducts heat 2x better than diamond; its electrical conductivity is 13x better than copper; it absorbs only 2.3% of reflecting light; it is impervious so that even the smallest atom (helium) can’t pass through a defect-free monolayer graphene sheet; and its high surface area of 2630 square meters per gram means that with less than 3 grams you could cover an entire soccer field (well, practically speaking you would need 6 grams, since 2630 m2/g is the surface area for both sides of a graphene sheet).

Graphene’s remarkable conductivity, strength and elasticity has also made it a promising choice for stretchable electronics – a technology that aims to produce circuits on flexible plastic substrates for applications like bendable solar cells or robotic-like artificial skin.

Graphene is a two-dimensional carbon allotrope with the carbon atoms arranged in a two-dimensional honeycomb lattice. It was first isolated in 2004 and is an extremely thin material along with being flexible and transparent. It is one of the strongest materials at present and the carbon arrangement provides it with attractive and unusual characteristics. Due to these reasons, it is one of the most promising nanomaterials and is being considered in a wide range of applications ranging from optics to electronics.

Graphene is the basic building block for other graphitic materials; it also represents a conceptually new class of materials that are only one atom thick, so-called two-dimensional (2D) materials (they are called 2D because they extends in only two dimensions: length and width; as the material is only one atom thick, the third dimension, height, is considered to be zero).

Due to the strong bonds and unbroken pattern between the carbon atoms, graphene is considered the strongest material at present. As charge carriers in graphene have small effective mass; they have attractive electrical and thermal properties with respect to electronic devices. The electrical properties include optical transparency, high current-carrying capability and high carrier mobility or velocity. The thermal properties include high thermal conductivity and high mechanical strength. Graphene conducts electricity with electrons moving significantly faster than silicon with fewer interruptions. It is also an excellent heat conductor and is conductive independent of the temperature present. The two-dimensional structure of graphene improves the electrostatics required for transistors. By weight, graphene is stronger than steel.

The impressive intrinsic mechanical properties of graphene, its stiffness, strength and toughness, are one of the reasons that make graphene stand out both as an individual material and as a reinforcing agent in composites. They are caused by the stability of the sp2 bonds that form the hexagonal lattice and oppose a variety of in-plane deformations.

Scientists have found that graphene remains capable of conducting electricity even at the limit of nominally zero carrier concentration because the electrons don’t seem to slow down or localize. The electrons moving around carbon atoms interact with the periodic potential of graphene’s honeycomb lattice, which gives rise to new quasiparticles that have lost their mass, or rest mass (so-called massless Dirac fermions). That means that graphene never stops conducting. It was also found that they travel far faster than electrons in other semiconductors.

If graphene had merely one of its many superlative traits, it would be the subject of intense research into potential uses. Being so remarkable in so many ways, graphene has inspired scientists to think of a wide range of uses for the material, in fields as varied as consumer tech and environmental science.

In addition to its powerful electrical properties, graphene is also highly flexible and transparent. This makes it perfect for use in portable electronics. Smart phones and tablets could become much more durable using graphene, and perhaps could even be folded up like paper. Wearable electronic devices have been growing in popularity recently. With graphene, these devices could be made even more useful, designed to fit snugly around limbs and bending to accommodate various forms of exercise.

Unfortunately, this is all theoretical. Current graphene cells are not yet up to par with silicon cells. Thankfully, research into graphene solar cells is ongoing, and the efficiency of such cells is increasing. Before long, cheaper, more powerful graphene cells could produce a massive surge in renewable energy.

It is the first-ever graphene-infused carbon fiber helmet that capitalizes on the material’s thin, strong and conductive, flexible and light characteristics to create a helmet that absorbs and dissipates impact better than your average helmet. It also disperses heat more efficiently, so it’s cooler.

What is the difference between graphene and graphite?

Graphene is simply one atomic layer of graphite – a layer of sp2 bonded carbon atoms arranged in a hexagonal or honeycomb lattice. Graphite is a commonly found mineral and is composed of many layers of graphene.

Is graphene a molecule?

Graphene is a single layer (monolayer) of carbon atoms, tightly bound in a hexagonal honeycomb lattice. It is an allotrope of carbon in the form of a plane of sp2-bonded atoms with a molecular bond length of 0.142 nanometres.

How is graphene bulletproof?

Bulletproof graphene makes ultra-strong body armour. … Recent tests suggest that pure graphene performs twice as well as the fabric currently used in bulletproofvests, making it an ideal armour for soldiers and police. Graphene is a sheet of single carbon atoms bonded together in a honeycomb shape.