A satellite is any object that moves in a curved path around a planet. The moon is Earth’s original, natural satellite, and there are many man-made (artificial) satellites, usually closer to Earth. The path a satellite follows is an orbit, which sometimes takes the shape of a circle.

To understand why satellites move this way, we must revisit our friend Newton. Newton proposed that a force — gravity — exists between any two objects in the universe. If it weren’t for this force, a satellite in motion near a planet would continue in motion at the same speed and in the same direction — a straight line. This straight-line inertial path of a satellite, however, is balanced by a strong gravitational attraction directed toward the center of the planet. 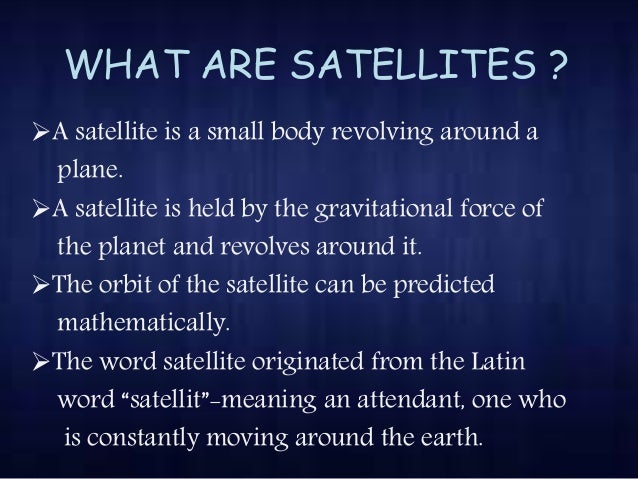 Earth and the moon are examples of natural satellites. Thousands of artificial, or man-made, satellites orbit Earth. Some take pictures of the planet that help meteorologists predict weather and track hurricanes. Some take pictures of other planets, the sun, black holes, dark matter or faraway galaxies. These pictures help scientists better understand the solar system and universe.

Still other satellites are used mainly for communications, such as beaming TV signals and phone calls around the world. A group of more than 20 satellites make up the Global Positioning System, or GPS. If you have a GPS receiver, these satellites can help figure out your exact location. 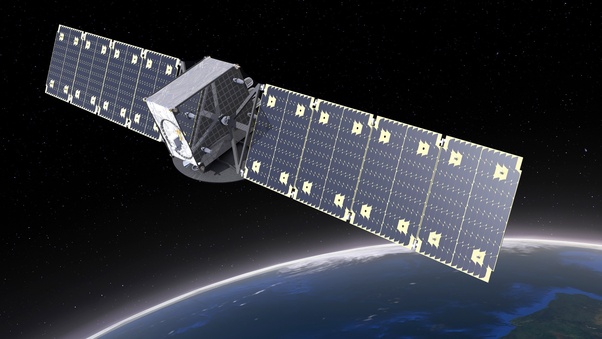 Why Are Satellites Important?
The bird’s-eye view that satellites have allows them to see large areas of Earth at one time. This ability means satellites can collect more data, more quickly, than instruments on the ground.

Satellites also can see into space better than telescopes at Earth’s surface. That’s because satellites fly above the clouds, dust and molecules in the atmosphere that can block the view from ground level.

Before satellites, TV signals didn’t go very far. TV signals only travel in straight lines. So they would quickly trail off into space instead of following Earth’s curve. Sometimes mountains or tall buildings would block them. Phone calls to faraway places were also a problem. Setting up telephone wires over long distances or underwater is difficult and costs a lot.

With satellites, TV signals and phone calls are sent upward to a satellite. Then, almost instantly, the satellite can send them back down to different locations on Earth.

Why Don’t Satellites Crash Into Each Other?
Actually, they can. NASA and other U.S. and international organizations keep track of satellites in space. Collisions are rare because when a satellite is launched, it is placed into an orbit designed to avoid other satellites. But orbits can change over time. And the chances of a crash increase as more and more satellites are launched into space.

In February 2009, two communications satellites – one American and one Russian – collided in space. This, however, is believed to be the first time two man-made satellites have collided accidentally.

On the outside of Sputnik, four whip antennas transmitted on shortwave frequencies above and below what is today’s citizens-band (27 megahertz). Tracking stations on the ground picked up the radio signals and confirmed that the tiny satellite had survived the launch and was successfully tracing a path around our planet. A month later, the Soviets placed a companion craft, Sputnik 2, in orbit. Nestled inside the capsule was a dog by the name of Laika.

Earth observation satellites check the planet for changes in everything from temperature to forestation to ice-sheet coverage. The most famous are the Landsat series.

Newton may have worked through the mental exercise of launching a satellite, but it would take a while before we actually accomplished the feat. One of the early visionaries was sci-fi writer Arthur C. Clarke. In 1945, Clarke suggested that satellites could be placed into orbit so that they moved in the same direction and at the same rate as the spinning Earth. These so-called geostationary satellites, he proposed, could be used for communications.

A special NASA satellite called the Long Duration Exposure Facility (LDEF) was put in orbit to study the long-term effects of collisions with space junk. The space shuttle Challenger deployed LDEF in April 1984, and the space shuttle Columbia retrieved it in January 1990. Over its nearly six-year mission, the satellite’s instruments recorded more than 20,000 impacts, some of which were caused by micrometeorites, others by orbital debris.